Week 5 already...we have been busy over the weekend and made a change to the family room.  Got rid of the big bulky TV cabinet and put in a new low one (same one as in our lounge room) with some shelving! It looks awesome!  I will save the photos for later when we get to the living room.

Week 5 is organise recipes and cookbooks. I had recipes and cookbooks in quite a few places over the house.  We got a Thermomix in November, so my thermomix cookbooks were in the kitchen cupboard below the Thermomix. I also was signed up to a meal planning service Meals by Mel so had all the sheets of paper from this in a magazine folder on the shelf.  And then I had numerous cookbooks in the lounge room on the book shelf.

I started by going through each cookbook and deciding it's purpose.  Many of them I've hardly used lately. A couple of them had to say as they were given to me by my Grandma (Mama) who sadly passed away June 2011.  They had her handwriting in them.  They are keepers!  A couple were presents from my Mum and Aunties.  I wanted to keep those too. The Thai cookbook we got when Nigel and I did a Thai cooking course in Thailand.  Not sure if I'm going to try the recipes - but again sentimental value. And of course I need the kids birthday cake book and the kids cooking books! The Thermomix books I use regularly so they are keepers too.

There were a few which were easy to put into the "get rid of" pile. Some I had never used, some not in ages.  The weight watchers cookbooks were harder for me to decide on. I lost weight with weight watchers in the past and spent good money on these books.  But after going through the books I made the decision that they had to go. The recipes weren't things I was going to make - and if I wanted recipes it's not hard to find on the interent.  So thanks for the memories - but bye WW cookbooks!  So I got a little pile of "of you go to a new home" books. 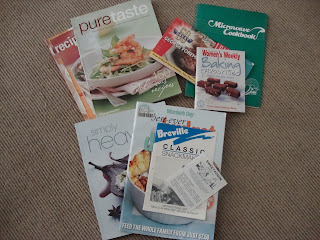 Next I went through all the loose recipes I had - such as the Meals by Mel ones - to determine which ones I would use again.  I recycled all those our family didn't like much, and sorted the ones we did like into a folder. I them under the categories of chicken, mince, red meat, pasta/pizza/rice and sweets/slices. These are in the green folder.  I also have a blue folder for printed thermomix recipes.  My aim is to eventually convert a lot of my normal recipes to thermomix ones. I prefer to have my recipes printed in hard copy rather than on the computer - easier for me to use and I don't have to bring the laptop into the kitchen for cooking.

Then I had to decide where to store the cookbooks and folders.  It dawned on me that as we put hooks up for the kids school/childcare bags, I now had extra spots in the draws under the kitchen bench. As this was closer to the kitchen than the bookcase where they were previously held, it seemed like a perfect spot for them. I chose a box right on the end, so closest to getting to the kitchen.  As they are the other side of the kitchen there is no chance they will get damaged from being in the kitchen, and they are easy to grab when needed. 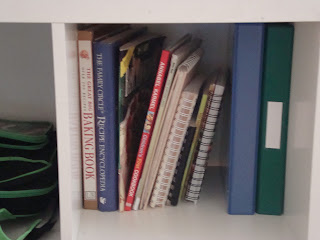 And here is where they sit in relation to the kitchen. They are in the top right hand corner! 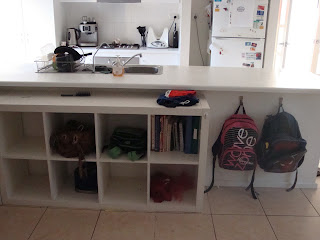 Overall I'm quite pleased with the outcome. Wasn't a big job but should make quite a bit of difference to organisation - and now leaves a bit more room on my bookcase (which was chock block full) for other things.
Posted by Bec at 02:37